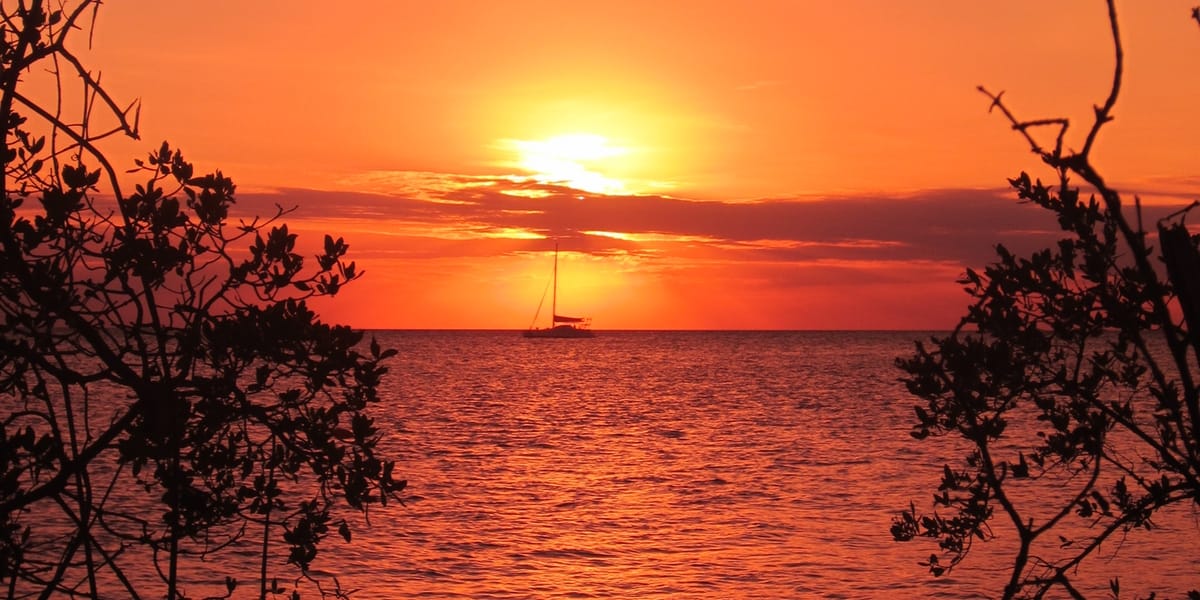 Sailing in Key West after the Hurricane
A Perspective By Bob Solliday, USCG Captain and ASA Instructor

Many have heard the tales of destruction that hurricane Irma left in her wake. The worst of the damage occurred in the middle keys near Marathon and Isla Morada where the eye of the storm hit. The deaths, the flooding, and the wind damage were unbelievable. And the storm surge seemed to obliterate everything in its path. Homes and businesses were destroyed, boats and marinas wiped out, and, in some cases, entire keys defoliated.

Key West got hit hard, but it did not get the worst of it. Certainly, homes were damaged and the roads covered with debris, but thanks to a lot of hard work Duval Street was functioning and open for business at the end of October. Many of the boats on weak moorings were lost and can be seen aground in the mangroves or up in the shallow areas. But most of the boats in the marinas survived, and the fishing boats, SCUBA boats, and sunset boats are open for business.

Kimber Tracy, the owner of Key West Sailing Academy (keywestsailingacademy.com), had booked a 103, 104, and 114 combined private course for two weeks after the hurricane and that definitely was not going to work. The school boats which had been tied securely in the Key West Harbour Marina had some minor damage to repair, but the entire Key West area was not ready for tourists. She rescheduled the couple for the end of October and I flew down to teach them.

As the date approached, we were originally concerned about the normal life services in Key West, but the area was regrouping rather quickly. FEMA and all others were working diligently to restore the basics. And the Coast Guard was checking the waterways, removing sunken vessels, and making the area navigable.

Dena and Ken, my students, had flown into Miami from Memphis and drove down A1A. They confirmed the devastation in the middle keys and the mounds of debris that were collecting on the roads to be removed. Apparently, three piles were requested depending on the content. Recyclables in one, foliage in another, and appliances in their own pile. 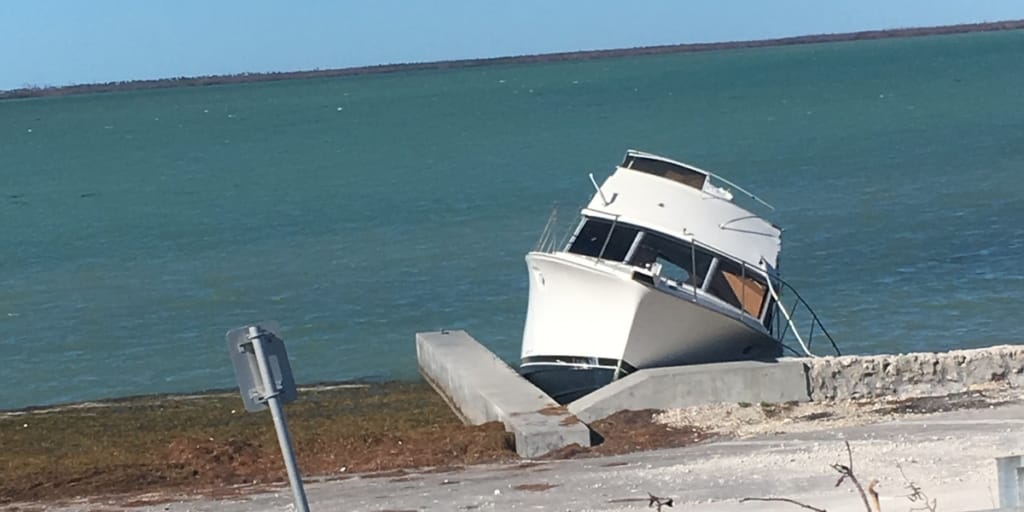 We quickly provisioned the boat and prepared to depart the following day. The weather forecast looked fabulous with a steady 18 to 20 knot wind out of the east. We were heading west so the Leopard 47 catamaran would be moving quickly with the wind behind us. Our plan was for classroom time in the morning, and then head to the beautiful Marquesas Keys, our farthest western destination. This float plan would enable us to work our way back east the following days when the wind was lighter.

The classroom time went by quickly and the wind was building. My students were getting anxious and had that look like they were ready to sail. After leaving the marina, you could quickly see some of the damaged boats up in the mangroves and aground in the shallows. As we motored out, some of the destroyed day markers had been replaced with temporary buoys, but everything was still well marked and functioning. Thank you USCG!

After some boat handling exercises, the four-hour sail down the keys was quick and uneventful. The float plan took us out beyond the reef into the crystal blue Atlantic and the boat performed well. Everyone was having a great day of learning and we saw lots of turtles and dolphins. 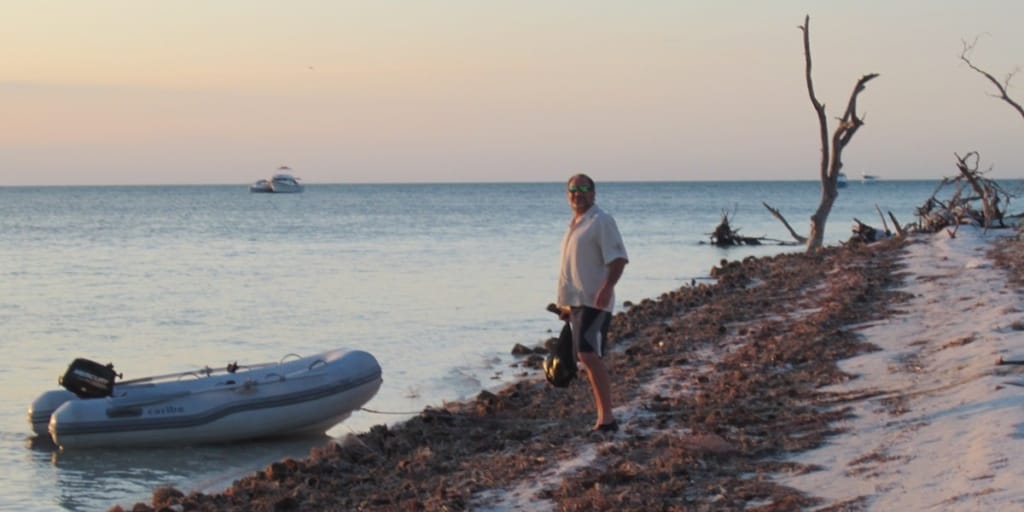 Our farthest west destination was the Marquesas Keys, a small set of keys with a beautiful beach and warm water about 35 miles west of Key West. It has an excellent sandy anchorage on the west side where the depth ranges from 5 to 15 feet. Add the short dinghy ride to a beautiful beach and it becomes the perfect spot for overnight.

After sailing for four hours we headed north back through the reef and to some snorkeling spots to the western anchorage of the Marquesas Keys. We practiced some anchoring and boat handling skills but, once again, the students were anxious to learn about the dinghy and get to the beach before the fabulous sunset.

The sunsets in Key West are legendary and the tourists flock to Mallory Square to watch them. However, the crew soon learn that there is nothing more beautiful or rewarding than sitting on a beautiful beach watching a magnificent sunset behind the sailboat you just sailed on. Plus, most people are simply mesmerized by the multitude of colors.

After some cocktails and grilled shrimp, we relaxed in the large catamaran and discussed the day and what they had learned. All were amazed at seeing the wrecked boats at departure, but equally surprised that the sailing was so nice after the hurricane. Equally impressive is the fact that these westerly keys are so pristine only 45 days after the hurricane. We all concluded that Mother Nature is truly resilient.

The next day’s classroom time was followed by another dinghy trip to the beach and a short hike. Upon their return, the stories were interesting about their beachcombing. In addition to the expected driftwood and such, pieces of boats and debris left over from the hurricane were scattered around.

After the beach hike, the forecasted light easterly showed up so we hauled anchor and sailed back toward Boca Grande Key. It is a short distance of about ten miles so we stayed inside the reef and worked our way eastward into the weather. It was an interesting sail and took us longer than most of the crew anticipated as they learned about the big cruising catamaran’s poor close-hauled sailing characteristics.

We eventually dropped the sails and motored into the anchorage on the west side of Boca Grande Key. This is another good 5 to 15 foot sandy-bottomed anchorage a short distance off a beautiful beach. However, the tidal flow runs through the anchorage and you will notice the boats spinning around their anchors every time the tide changes. 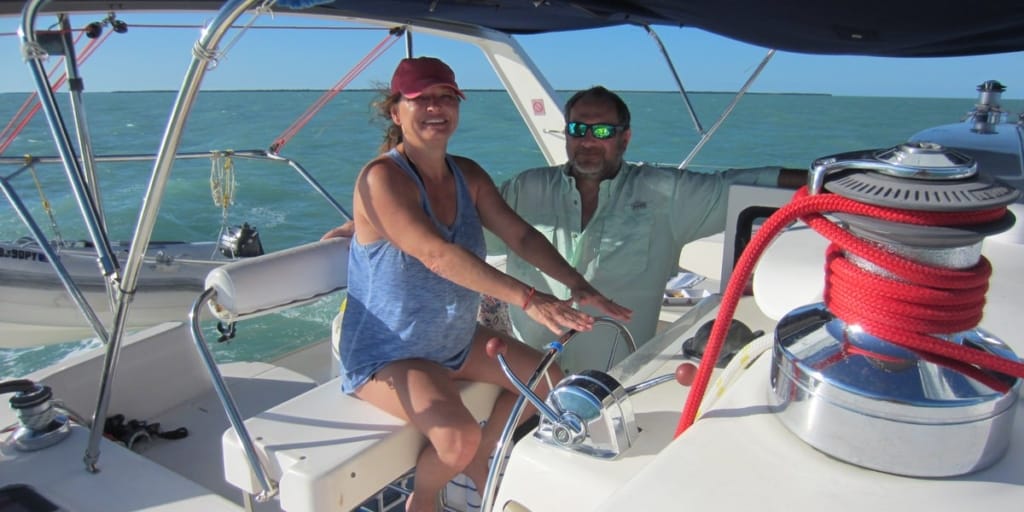 After a few more times practicing anchoring, we launched the dinghy for the trip to the beach and Mother Nature delivered another beautiful sunset. The brilliant colors accented with cloud formations created lasting memories of sailing in the keys. And simply watching the sunsets is truly one of the delights of the Key West sailing adventure.

When the grilled steaks and wine were finished not much studying was done as the night was clear and the stars were incredibly bright. The crew just laid on the deck staring skyward as the milky way, satellites, and a few falling stars illuminated the night. It was so peaceful and calm.

They enjoyed another beachcombing morning before hauling anchor at noon and starting the two-hour motoring leg back to our marina for some docking maneuvers. Lots of information was reviewed en route as the ASA tests were the following morning before departure.

We motored past the waterfront of Key West and more boats were seen up on the rocks or stacked on land waiting to be hauled away. Once again, we saw the havoc and destruction Mother Nature is capable of delivering. We noticed that the cleanup was still underway and will be for some time to come. But during this trip we also saw and experienced how resilient the keys can be as the beaches were still beautiful and the weather and sailing excellent.

At this time, Key West is getting back to normal and preparing for a busy spring. The total destruction in some areas of the middle keys will take many years to rebuild and some areas will never be the same. Many people will just never return.

Lots of work still needs to be done and any contributions to the hurricane relief funds are greatly appreciated. Or, just come on down and enjoy a sailing adventure and the beautiful sunsets!

Captain Bob Solliday is a USCG Master licensed 50 ton captain with over 25,000 blue water sailing and boating miles in over forty years on the water. He resides near Marina del Rey, CA and is an ASA certified sailing instructor. He does private charters, boat deliveries, and continues to race sailboats and teach sailing. The Key West Sailing Academy is open for business – see asa.com/schools/florida-keys/key-west-sailing-academy/