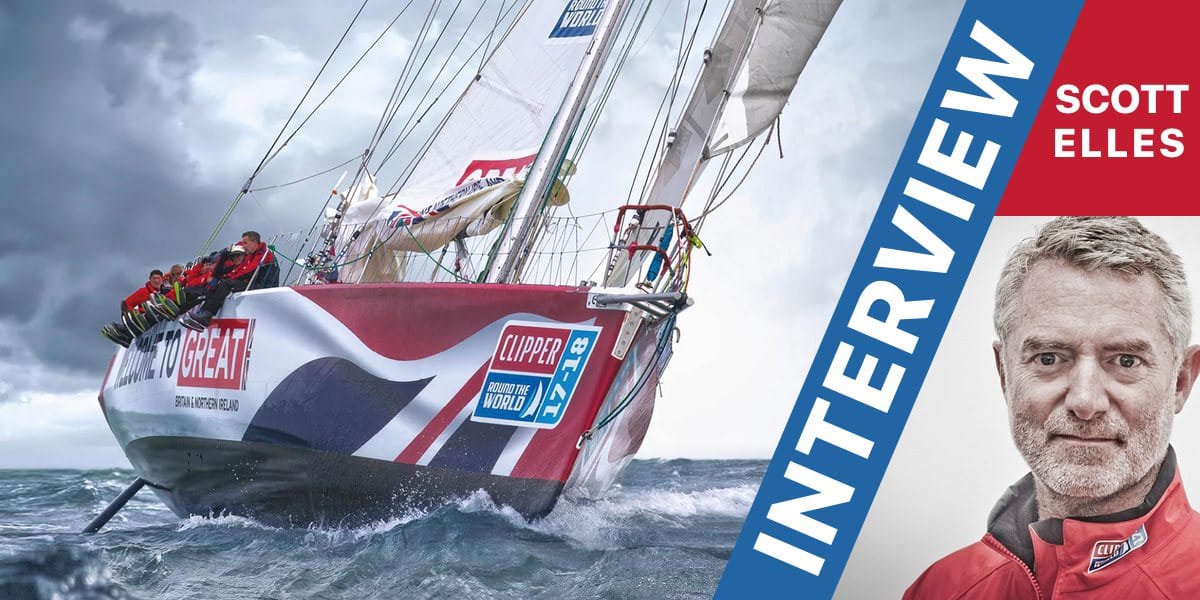 Today ASA certified sailor Scott Elles will be competing in the Sydney Hobart Race as part of leg 4 of the Clipper Round the World Race. This is part 2 of a 2 part interview. We spoke to Scott after leg one and look forward to catching up after he completes Leg 8.

ASA: You started sailing when you were 50?

ASA: You’ll be competing in the Sydney Hobart Race which is sometimes considered notorious. Are you familiar with its reputation?

Elles: Very familiar with it. In fact there’s a guy that I’ve met who did the last [Clipper] race – he did the whole round the world. He said the hardest sailing he did, the entire way around, without a doubt, was the Sydney-Hobart race.

ASA: How are you feeling about going into the next leg. Are you now that you’ve done one. Are you just champing at the bit?

Elles: Yeah I’m excited to get back. It was great. I really enjoyed being able to come home after leg one and see my wife and kids. Check on things with the business. I watched the live feed when my team arrived to Cape Town [leg 2] and seeing them all arrive in Cape Town it was kind of tough.

ASA: A little envious not being there?

ASA: So you feel like you got your money’s worth out of this thing?

Elles: Oh definitely. Yeah. The adventure that you had, the lifelong friendships that you make, the experience you get. It’s pretty cool stuff.
“Our watch began with a cold dark grey cloudy sky, pea soup fog and drizzle. The watch then proceeded with a flurry of evolutions from hoisting the staysail to hoisting the code 1, dropping the yankee 1, dropping the staysail, hoisting the antiwrap net, gybe, gybe again! Somewhere during all of this activity, with barely time to notice, Tasmania appeared on the horizon along with a glorious sunrise and clearing sky.“
Excerpt from the Team Garmin Crew Diary on Day 10 of leg 3 written by Scott Elles

ASA: How did the expectation square with the reality of this adventure?

Elles: It’s still a long way to go. But I’d say for me that the reality has been better than the expectation. Initially, going into it, I had an expectation that it was almost going to be too easy? You know, that it would be kind of dumbed-down, if that makes any sense. Then you find that if you put a boat in the middle of the ocean, you really can’t dumb it down. It is what it is. Some people have asked me if there was a ship that follows you in case of a problem the problem…No there’s no ship. There’s no ship out there. I mean we didn’t see a ship for a month.

ASA: Were there any situations or major breakages out there?

Elles: We didn’t have anything on our boat.

ASA: What about the communication part of it all. How were you able to communicate?

Elles: We could communicate through sat phone – each person buys X amount of time. And then we also have a very crude kind of e-mail.

ASA: What did you feel was the hardest thing about coming back?

Elles: Two things – All this connectivity that we have. When you’re away from it for that long, you realize we build up a tolerance for it when you’re in the normal world. But when you haven’t been around it for a while. for me anyway, it’s very agitating and overwhelming to have this stuff coming at me all the time. And the other thing is TV. I realized when I get back to watching, especially news on TV, is a complete waste of your time because they were talking about the same thing two months ago when I left. And it hits you over the head like, what a waste of time.

ASA: So it’s changed you.

Elles: It has in some ways, definitely – I mean, how can it not?

For the latest news from the Clipper Round the World Race visit clipperroundtheworld.com. You can also track Scott on Team Garmin via the Race Viewer and also check out the Team Garmin Crew Diary.

Interested in joining the race? Applications are currently being accepted and training is already underway for the Clipper 2019-20 Race – APPLY NOW!