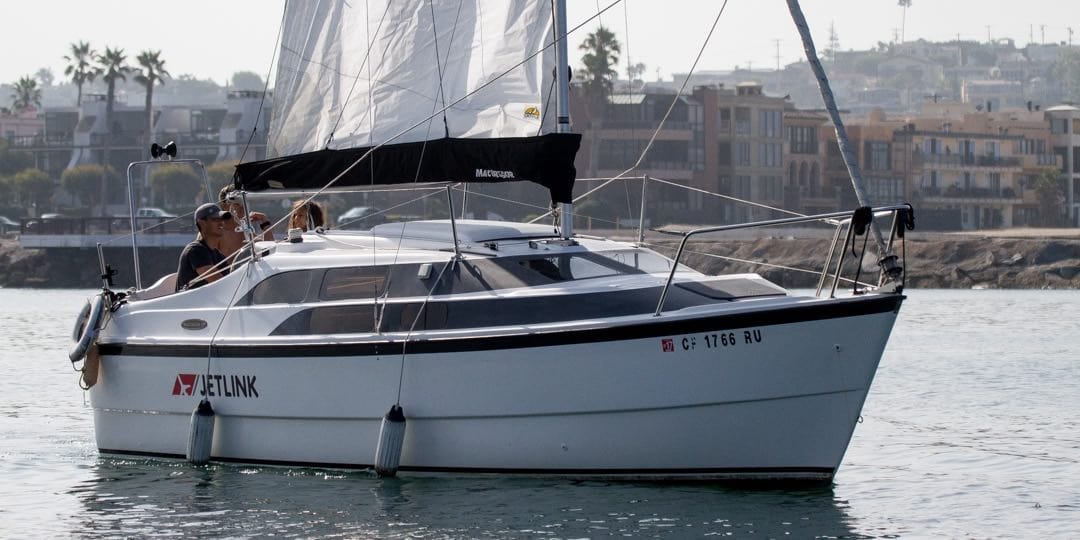 Generally speaking sailors are an opinionated bunch but, as a baseline, are okay with any boat you choose because at the end of the day, you’re still sailing and that’s a good thing. Oh, except for one boat – the MacGregor 26M. That boat can start a fight. What do you mean? It’s just a little day sailor with twin rudders, retractable keel for easy tailoring and a relatively spacious cuddy cabin, perfect for overnighting – how on earth could that annoy anyone? We’ll get into it, it does.

None of this makes immediate sense, but the mention of a MacGregor 26M makes eyes roll… in slow motion… all the way around. There are cases of sailors going to the emergency room from rolling there eyes too hard when someone mentioned the MacGregor 26M – that’s how severe all this is. Oh, and to make things a bit more confounding, it’s the best selling cruising sailboat there is – the company (that has now closed it’s doors when owner Roger MacGregor retired) sold over 38,000 boats. So, let’s get down to it. What is the issue?

The MacGregor was designed and marketed to non-sailors or would-be (sort of) sailors. It seems the company gave deep consideration towards something of a fictional demographic – a group of people who didn’t have any great knowledge of sailing but who like the idea of it. They assumed these people would probably not embrace the low speeds associated with traditional sailing – might be a deal breaker, so they slapped a big fat outboard on the transom and that problem was solved! Some MacGregors have engines as large as 70-HPs and can top 20-knots. MacGregor critics have said many times: “If you try and make something that’s both a powerboat and a sailboat, you’ll end up with the worst of both.” This may be true, but it’s safe to say most MacGregor owners don’t care. They just dropped the main and took off to beat the rain and get home for dinner. To this critique many M26 sailors will say, “enjoy that squall while I enjoy my medium rare Porterhouse!”

Another characteristic that bothers traditional sailors about the MacGregor 26 M is the design or “lines.” There are none. It’s really more of a powerboat blueprint but the boat does have some innovative elements like, for instance, a water ballast system that compensates for the lack of a keel, a rigging system that helps get the boat rigged in around 15-minutes, a rotating mast and a sliding galley that provides for accommodating more passengers. The high freeboard design isn’t sexy, but it does allow for a surprising amount of room down below. The little boat sports two large double berths/two singles, a dinette, galley, six-feet of headroom and a fully enclosed head.

This is another area where new MacGregor boat owners rejoice and critics scoff. A new boat, loaded, was around $35,000 in 2013 when they stopped producing them, but now used M 26M’s can be found for $20K or less. The scoffers believe there is no price point that will ever tempt them into stepping foot on a MacGregor 26. The boat, for some, represents a cheapening of the sport – a stripping away of the elegance and dignity that sailing withholds, leaving us with a mutant powerboat that wants to call itself a sailboat when the mood strikes. Not a pill purists will swallow.

Like them or not, one thing that is indisputable about the MacGregor 26 M is they have brought many non-sailors into the sailing universe. More than a few owners have gotten the sailing bug because they could afford it and then moved towards boats that were designed expressly for sailing.

We say live and let live. If you want to buy tarps and a dowel at Home Depot and fasten them to a canoe, that’s cool with us – as long as it’s safe. Although we’ll admit, when it comes to the MacGregor 26M, we’d much rather see you raise the sail and feel that heel than see you fire up that 70 h.p. and pull the waterskier around the lake. Besides, it’s cheaper to sail!