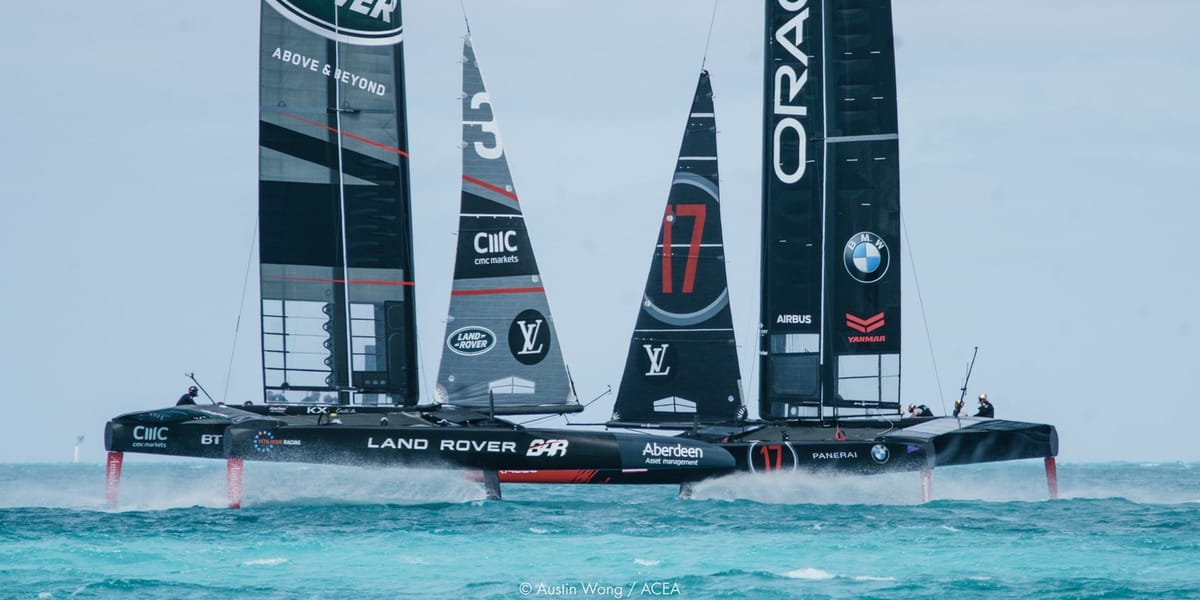 These days, just mention the words “America’s Cup” to any group of sailors and it’s likely that in no more than a few minutes they’ll all be arguing. Gone are the times when this same contingent would wait with bated breath, unified by their love of sailing, to see what beauty would be incarnated for this very special gentlemen’s match race around the buoys – a race that only happens every three or four years. Gorgeous boats would be designed especially for this occasion– the oldest and most dignified major sporting event in existence. Common sailors would await the unveiling of the world’s most foremost yacht designers’ creations only to be sailed by the world’s most decorated and respected sailors. What could be better? What could ever corrupt such bliss? The answer: foiling multihulls. 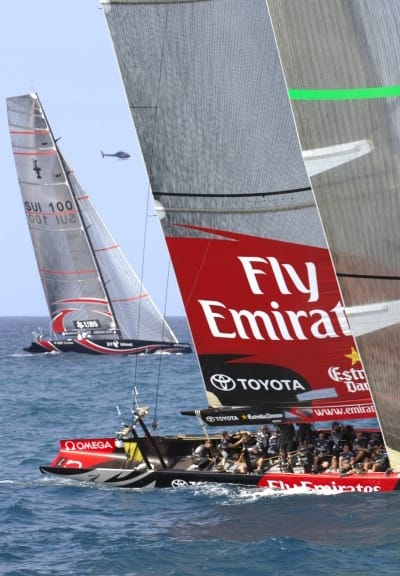 All was well in 2007 when sailing fans from around the world tuned in to see the shiny new graceful and sexy 24-meter monohulls compete in the waters of Valencia in good breezes and sunny skies. Eleven teams from all over the world grinded winches, called tactics and changed sails, not unlike most racing sailors did on their own boats, albeit with some distinct differences. Alinghy beat New Zealand in some very exciting racing and everyone was thrilled, but then it got weird…

Money, animosity, ego, politics and greed became the major players in the 33rd Cup and it all devolved into one of the strangest most public displays of billionaire bizarro world anyone had ever seen. It was compelling for all the wrong reasons, coming down to two very very wealthy middle-aged men spending ungodly sums of money to build one-off boats that were built for sheer speed – an other-worldly 90 x 90 trimaran with a hard wing built by the American team and a 90-foot catamaran with soft sails built by team Alinghi. They hired the best sailors in the world and tried to crush each other. The Americans won the somewhat sad contest and the America’s Cup would never look the same going forward – it was hard wings and multihulls from here on in. Although some loved this sexy, Formula One style speed driven focus, traditionalists lamented. The ability to relate would soon disappear.

In the 34th Cup the world saw 72-foot foiling catamarans with wings that literally looked like they just came off of a jet airliner. The boats would reach velocities that would triple the wind speed with the two feather-light carbon fiber hulls popping out of the water and truly flying around the marks with nothing but an L-shaped foil in the water. Armchair sailors were left with less to say. These races were more about the efficiency of hydraulic systems and airplane wing design than sail trim and racing prowess.

“There is a lot of similarity between this boat and an aircraft,” said Xaviar Pol, one of the engineers working on the current America’s Cup 50-foot cats, in a CNN report. “The foil on this boat is exactly like the wing of an aircraft.”

Pol went on to say that if you don’t have a proper control system you “can’t have a stable flight.” You read that correctly – designers refer to sailing around the buoys as a “flight.”

But let us not forget – the America’s Cup has always been a design contest first. This fact is often lost on sailing fans that love the on-water competitive aspect of the event. With personalities like Dennis Conner, Russell Coutts and Jimmy Spithill it’s easy to think of the America’s Cup as any other high-level sporting event – a race with teams of athletes that win or lose. The AC is not this. Much of the battle is on the drafting table. Generally speaking, a box rule is in place and design teams are battling away day and night. You can bet they are at it now, tweaking foil designs and control systems that will squeak out another sixteenth of a knot.

So where does that leave us – the sailing fan? Perhaps not in a place we once called home. We no longer look at the America’s Cup boats as gorgeous designs with cutting edge innovations that will one day trickle down to the very boat we sail. We can no longer look at the racing to watch and take notes, applying what we see to our own local habits. Case and point: One of this year’s AC boats actually has a crewman assigned to a power-generating stationary bicycle. The contemporary America’s Cup is a different beast.

Perhaps that’s just the way to approach it – as a different beast. It’s a high-speed spectacle full of NASA style innovation. It’s a trapeze act that began as a sailboat race but still has sailing as it’s beating heart. Let us see it that way and enjoy what lies before us until someone does what can be done in any given America’s Cup – scrap it and start with a completely different concept.

For more information about the 35th America’s Cup visit americascup.com