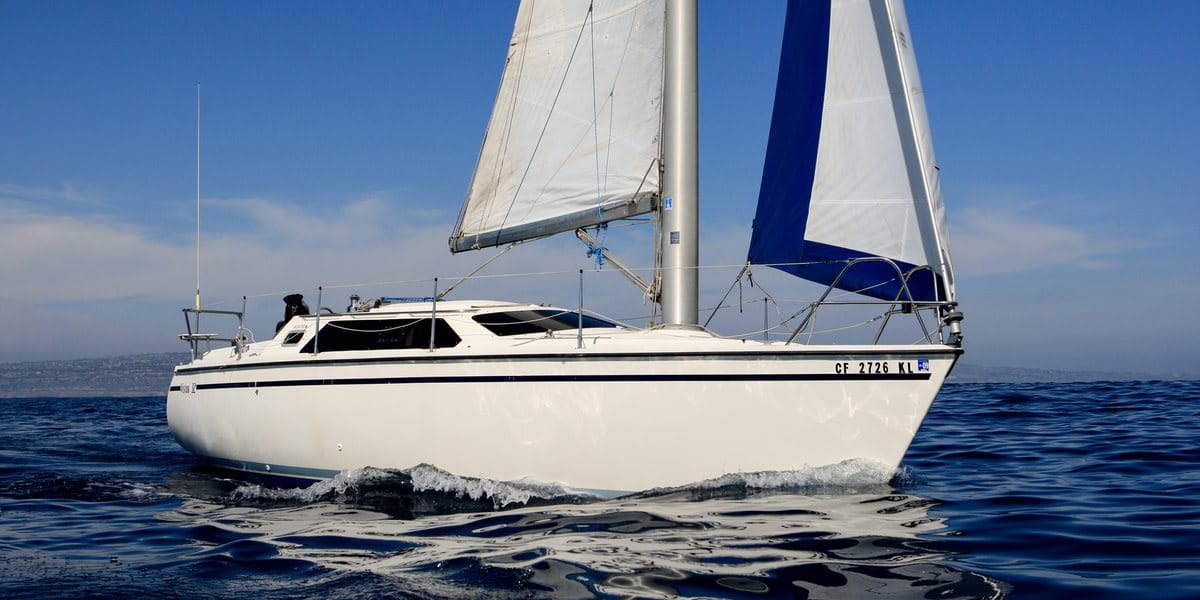 One cool thing about sailing is the vast amount of boat designs we have to choose from. From wooden yawls to foiling catamarans, there is, no doubt, a boat out there to suit your fancy. But many tend to stick to the world of production boats, especially in the cruising world – they’re tried and tested, easy to get serviced and buy parts for, and they are generally reliable and well made. They are also normally designed relatively conservatively and broadly to attract a cross-section of buyers. So with that as our foundation we wanted to take a look at a production boat that was built in the late 80s and early 90s that bucked the trends and stepped outside the norm – the Hunter Vision 32 & 36.

The 32 and 36 are essentially the same boats with different lengths so we’ll just call both boats “the Vision.” There is really nothing particularly extraordinary about the Vision compared to most cruising boats of that time except that Hunter took a crack at making a boat with a free-standing mast – literally a giant aluminum pole set far-forward and keel-stepped. 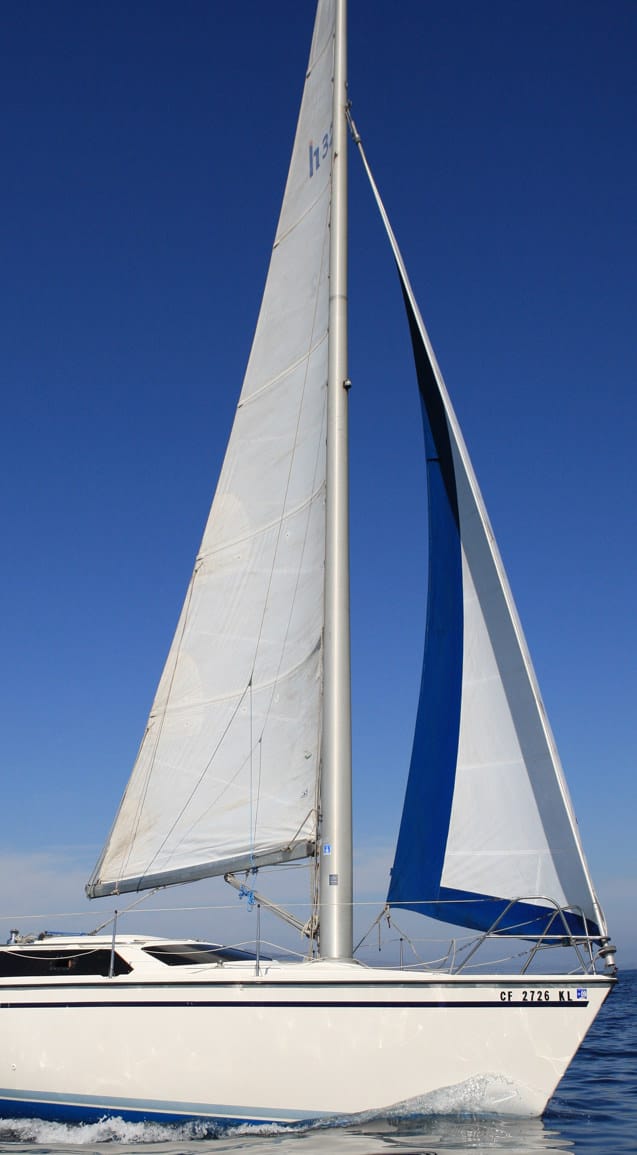 No Spreaders, No Shrouds, No Backstay!

Hunter took a page out of the handbook of Freedom Yachts who brought unstayed rigs to prominence in the mid to late 70s. Olympic sailor Garry Hoyt explored the design of unstayed rigs to give “’freedom’ from the inefficient sail shapes of traditional sloop rigs as well as to give ‘freedom’ from the compression and maintenance issues associated with standing rigging.”

On the Hunter Vision, there is what looks like a street lamp pole holding an enormous mainsail in a quasi cat rigged set up. Not surprisingly, the configuration gets a hearty dose of contradicting reviews. Some believe that the weight and width of the freestanding mast make for poor sailing qualities, particularly upwind. Although most critics will concede that the boat does pretty well on a reach and downwind (due to the huge main’s ability to be set farther out than most boats can achieve) they will cite other qualities that indicate the boat is something of a dog. Many don’t like that there is nothing to hold onto when going forward and others flinch at the manageability (or lack thereof) of such a large main.

“It is easy to cite the disadvantages of a stayless rig,” said one sailor on a cruising forum. “These would include a larger diameter mast which means that the mainsail is operating in a bigger turbulent zone behind the mast. This hurts windward performance and severely impacts light air performance.”

Of course later in the thread another sailor (a Hunter Vision owner) debunked most of the criticisms – such is the world of sailing discussions on the internet.

One thing that can’t be disputed is that Visions need no wires or turnbuckles and there is no corrosion or rig tension to worry about. It’s also said that these types of rigs allow spill-off aloft, which works well in heavier weather. Certainly the mast set so far forward creates a roomy saloon, which if you’re familiar with Hunter designs, might well have been the motivation for the attempt. 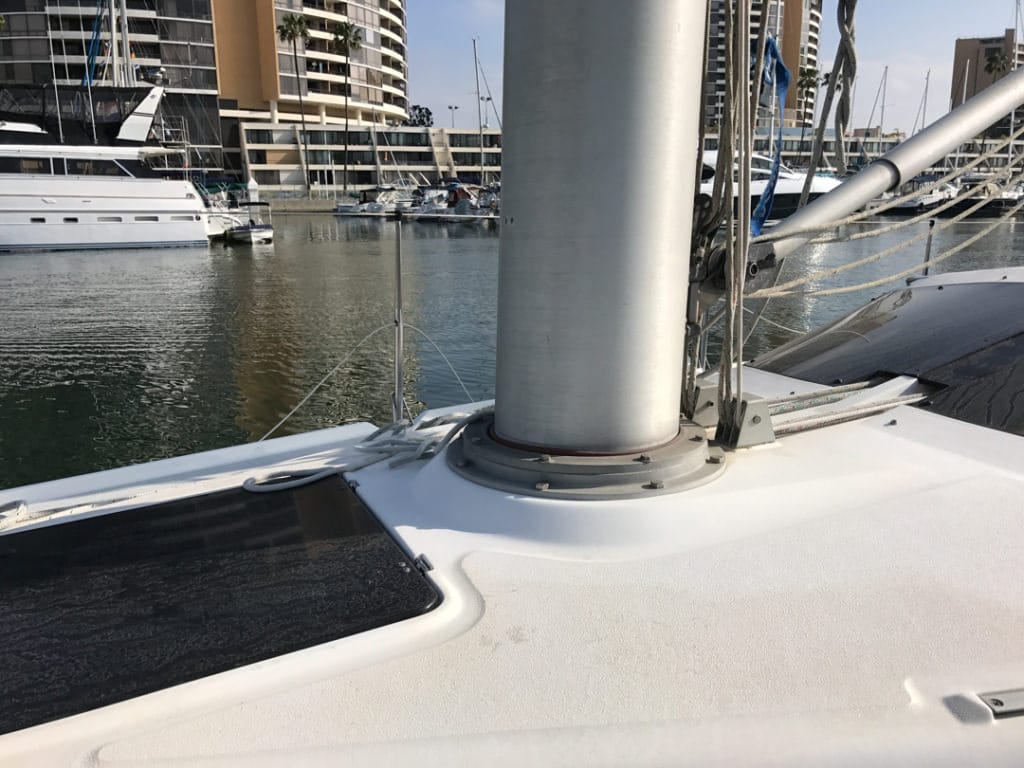 As it all turned out, the arguments over whether or not this alternative idea was worth doing got cut short, for Hunter discontinued the Vision after only about five years. Sales for the boat were not outstanding but it’s supposedly the cost of the masts that killed the production.

Visions still turn up regularly on the used market and are often priced quite affordably, probably due to the mixed reviews they receive and their somewhat misunderstood, non-traditional identity. 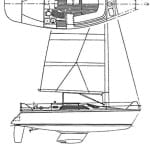 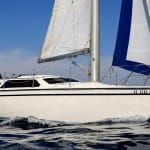 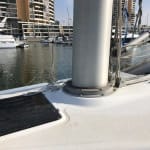 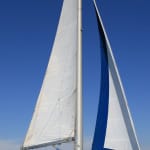 No Spreaders, No Shrouds, No Backstay!