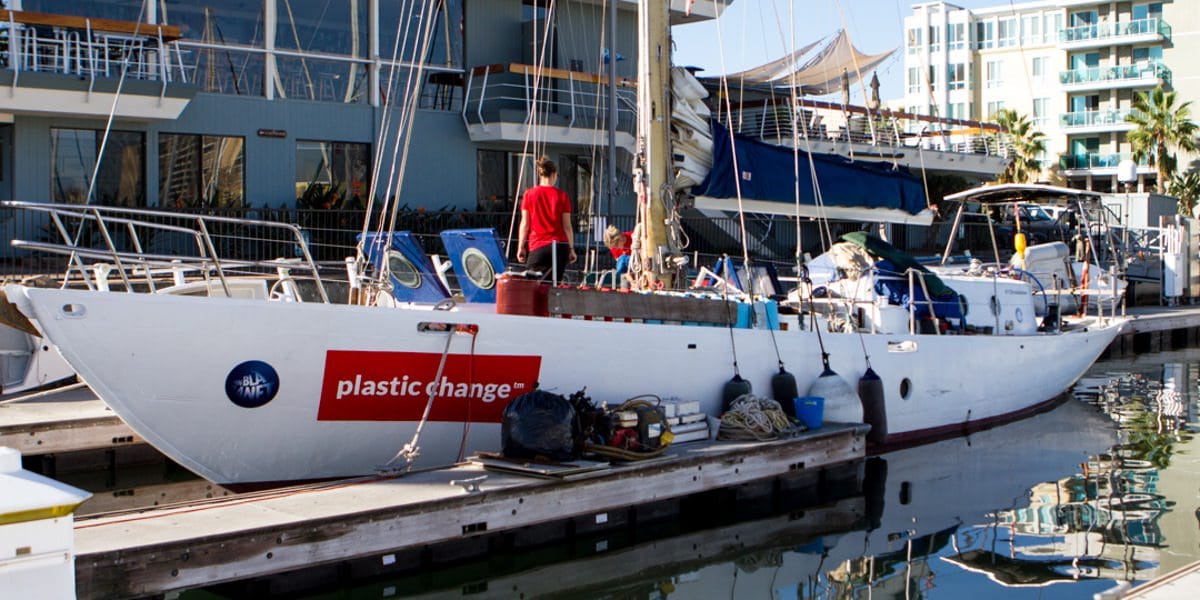 One of the great things about sailing is its appeal to varying personality types. If you’re a competitive spirit, then racing is probably your bag; if adventure starts your engine, then cruising will quench your thirst. Maybe drinking wine on the water is how you like to pass the time so that cal 25 that only leaves the dock when the kids come around is just fine with you – it’s still sailing as far as you’re concerned!

All that is good stuff, but we also especially love when sailing gets utilized for the purpose of world change. ASA covered and kept track of the Mega Expedition organized by The Ocean Cleanup and loved seeing a fleet of sailboats explore the Great Pacific Garbage patch to gather samples in the pursuit of ridding the oceans of toxic plastic. And now, there is another effort along those same lines that is using sailing as a means for change.

Like The Ocean Cleanup, the Plastic Change organization is based in northern Europe and is actively working to combat the problem of plastic pollution in our oceans. Unlike Ocean Cleanup, they are not interested in extracting the plastic, but identifying it, understanding its origin and informing the process of prevention.

They are a small crew of scientists aboard a 54’ steel sloop built in the 1950s now heading from Los Angeles to the largest gyre in the world off the coast of Hawaii in the North Pacific. They began sailing through the Mediterranean, across the Atlantic, onto Bermuda where they examined the North Atlantic gyre. From there they sailed onto the Caribbean, through the Panama Canal to the Galapagos Islands, all along the way studying the issue of plastic in the oceans. For the past month they have been docked in Los Angeles where they have made repairs, done public outreach and raised a bit of money to keep the project going. After they do their research in the Garbage Patch and sail to Hawaii, the expedition will be over and the analytic work will begin.

“We expect to see a lot of pollution when we get to the North Pacific gyre,” said Torsten Geertz, who is skippering the boat. “It’s the most affected area in the world.”

Geertz knows the boat well – he’s been a part owner for the past 20-years. In 2014 another owner, Marine Biologist Henrik Beha Pedersen, founded the organization and they, along with a small team, began sailing her all over the world. Scientists, who are ordinarily on the small end of microscopes, are now seeing first hand what is happening with plastics in the oceans.

“When we do estimates of what’s being found on the surface, we’re missing 99% of what we know goes into the ocean, so we’re looking to see where else it goes,” said Biological Oceanographer Malene Mohl who now has thousands of miles sailing the oceans studying plastic pollution.

Mohl said she became even more concerned when the boat was sailing near the Galapagos Islands where currents don’t converge as they do in the Garbage Patch, and plastics were still being found. “We were so far from any land or congregating currents and each day I did a troll, I found plastic.

“To me it’s quite obvious that there has to be an affect,” she continued. “To add a whole new material in this quantity into the fragile balance of a marine ecosystem has to have an impact.”

To learn more, volunteer or donate to Plastic Change go to plasticchange.org