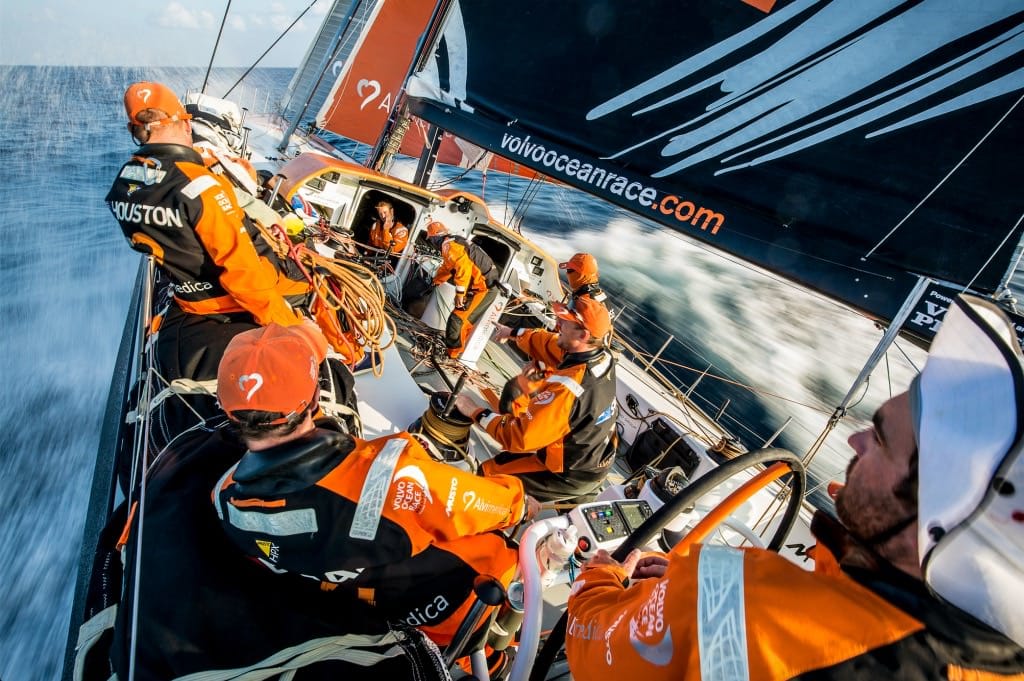 Putting aside whether you’re into racing or not and just thinking about the broader world of sports, it’s interesting to consider sailing and particularly yacht racing within that greater context. All recognized sports, especially the mainstream variety, share a sense of drama and competition, but none involve the elements of the outside world quite like sailing. Using the high profile Volvo Ocean Race as an example, it’s fascinating that a sporting event incorporates the quotient of all-out adventure that a competition like this does. NASCAR is life and limb for sure and surfing melds the natural environment into the rules of the contest, but nothing really compares to a 40,000-mile circling of the planet on a high-speed Volvo 70.

For nine months straight, on a race course of four oceans, in and around five continents, teams live in the tightest of quarters in the most uncomfortable circumstances racing 24-hours a day for weeks on end. There’s no game clock or flight to the next city where a similar situation will be there for the taking. There’s no stadium where ravenous fans will turn out and show their undying support. It’s the opposite. In this arena, it’s onward into the unknown – an unknown that might well contain dangers no one onboard has ever seen in places very few people have been. There’s a shore team who try to dial in the racers the best they can, giving them the score (so to speak), but this game is played far away from civilization, in remote areas of the planet, often in situations that might well terrify an ordinary person. Making sail changes in gale force winds and 30-foot waves is a day at the office. While Serena Williams grunts out an ace in the Australian Open to a packed stadium, an exhausted crewman on a Volvo boat gets sent up a hundred foot mast in a 12-foot sea to make a repair while doing 15-knots. There will be no press conference for this small victory, only the reward of not losing distance to the competition.

The differences are stark but the similarities lay in the idea that like other sports, strategy is key. In nearly all recognized major sports, outwitting and making fewer mistakes than the others is at the heart of winning. Sailing is this way, but unlike the others it demands that the participants manage anything and everything that an open ocean environment might throw their way. If the shot clock breaks during an NBA game, they stop the game and fix it. If it were to happen (somehow) in the Volvo, someone on the boat would fix it. Short of that, they would figure out another solution. Nothing stops the game beyond total catastrophe.

In addition to the physical aspects, the other major element at play is, of course, a deep understanding of ever-changing weather. Perhaps no other sport requires such a high level of scientific knowledge more than open ocean sailboat racing. Shore team weather experts in these events have NASA-like understanding of the planet’s weather patterns and tendencies.

Add it all together and you have one of the most demanding, grueling and incredible sports in the world – so different from anything else.. It’s a bit of a shame events like the Volvo, Vendee Globe (which is even more insane) and even the America’s Cup don’t get the recognition they deserve based on the uniqueness and remarkable nature of the sport itself. Ah well, perhaps one day they will see…