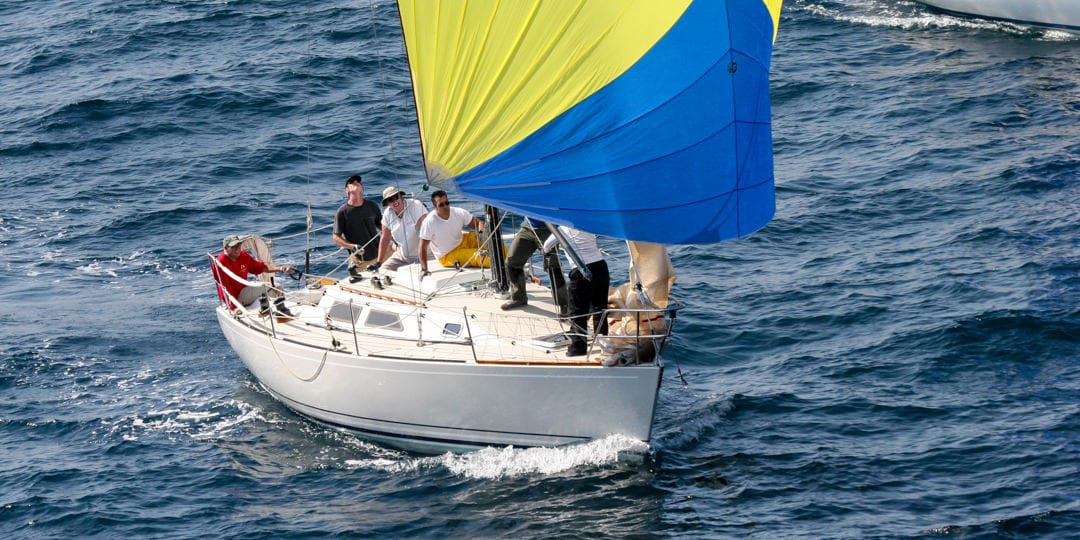 We know you don’t. BUT, let’s talk about it. We’ve found racing sailboats is one of those things that can be slightly controversial. Odd as it sounds there are some sailors who not only don’t like to race in a sailboat, they resent it – it bothers them. “Why would I ever want to sail around a triangle, stressing out, trying to go a half knot faster than someone else who is also white-knuckled and experiencing a bunch of his own stress? I want to relax when I sail – that’s why I sail!” Yes, we get it. You left out the part about intentionally trying to cut each other off and scream at one another.

It’s true that yacht racing allows for this type of behavior and the goal is definitely trying to get that small edge on your competitors, but put that aside for a minute and be open to a different view on why participating in some races might be a great thing to do.

First, forget about that whole white-knuckle stress thing…it doesn’t have to be that way, even if that is a perception. What about this – get some friends together and announce that soon you are interested is losing your first yacht race and that you need their help to ensure you do. Have fun preparing for your imminent loss. Let the crew know that you will be rounding the weather mark and you fully expect them to botch the spinnaker set and will be upset if they don’t. Enjoy the experience. Laugh. However, during this horrible first outing on the race course, you will notice that by virtue of being forced to make many turns, set sails often and attempt to sail consciously and well – there is an enormous and accelerated learning experience happening. “I didn’t have a great interest in racing when I first started,” said ASA instructor Nik Vale who has raced thousands of miles all over the West Coast. “It was an opportunity to get out on the water in a consistent way. I didn’t have a boat, but I liked to sail – lots of people need crew so I was able to sail every weekend because of racing. During that time, I learned an enormous amount and, in the process, got hooked.”

Not everyone who races is driven by a competitive nature – many just have fun getting together with friends as they learn more about sailing. It’s also cool to enjoy the teamwork aspect of the sport – win or lose. But perhaps most relevant is the idea that racing is a mandated excuse to get out on the water, keep the boat up to snuff (if you’re the owner) and get experience on the fast track.

Many a non-racer has, through a drunken promise at a yacht club or some other circumstance, found themselves competing in a race and finding that it’s actually not what they thought – that it is still, in many ways, a relaxing and enjoyable day on the water.

One last thing to consider is about the offered events in your given location. For those looking to start out easy, explore the variety of races that are out there and pick one that’s more suitable for the novice breed. Some places actually have races designed for first timers, but short of that, ask around and enter one that’s not overly serious.

We say, give it a shot – don’t compete for a trophy, compete for who has the most fun on the boat. If you try that, you just might find the odd race here and there is a cool way to spend the day and get some good learning in. By the way, there’s no way to prove that ‘who has the most fun’ thing, so you’re bound to come out ahead!