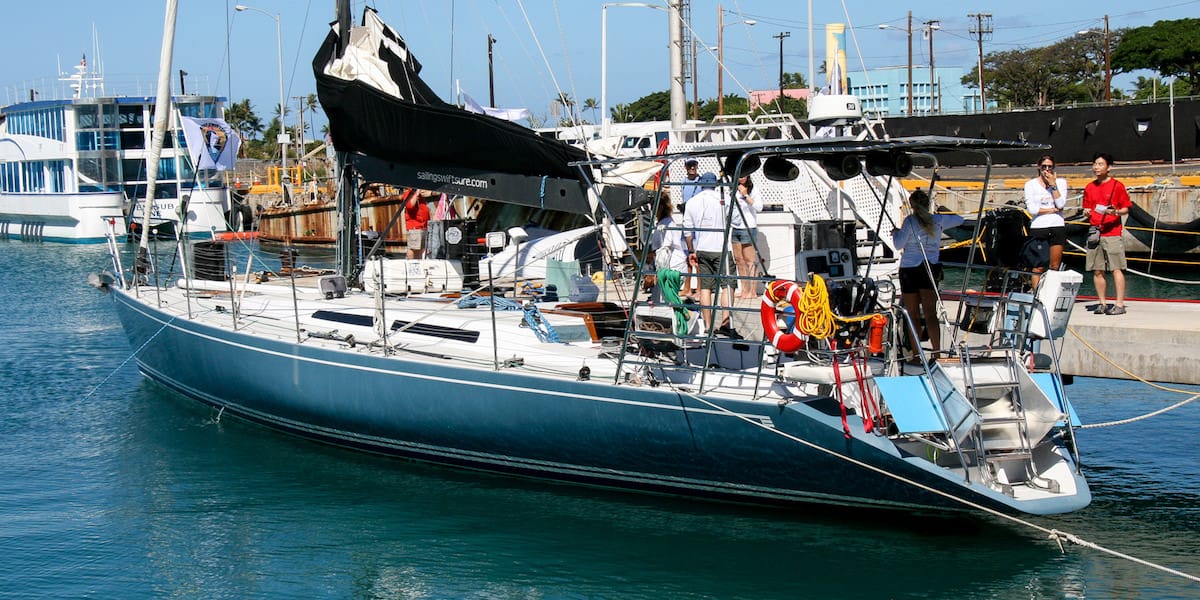 Back in the spring of this year, the American Sailing Association became involved in The Ocean Cleanup – an extremely ambitious project devoted to ridding the world’s oceans of harmful plastic pollution. The concept, devised by a 20-year-old Dutchman named Boyan Slat, involves capitalizing on the ocean’s currents to funnel large and small pieces of plastic into one place where they can then be collected and removed. If all goes according to plan, the plastic debris could then be sold on the recycling-market, which would inject a self sustaining financial component, thereby making the project something that could sustain itself in an ongoing way.

Part of “phase one” involved gathering research to assess just how much plastic is actually in the ocean – a statistic that has been mostly thought of as unreliable. To address this lack of statistical reliability, Slat proposed a bold concept – recruit as many ocean-going sailboats as he could find to traverse part of the Pacific Ocean (the so-called Great Pacific Garbage Patch) and collect data with specially made collection equipment. Once this plan was announced ASA immediately put the word out to the thousands of sailors in the network and attempted to mobilize the community.

Through the efforts of individuals, ASA, the Transpacific Yacht Race and others, the Ocean Cleanup signed up 38 boats, but through a variety of circumstances, they fielded a squad of 24 that actually made the journey from Hawaii to the mainland via the Garbage Patch. According to Slat this was still a substantial enough number of research vessels to collect the data the OC needed. When the mother-ship, a 170-foot trawler transformed into a floating science lab, returned to San Francisco in early September, Slat claimed victory. What was deemed The Mega Expedition became, according to Slat, the largest ocean research expedition in history. “The goal was to take more research in three weeks time, then has been taken in the past 40-years combined,” said Slat at a press conference on the docks of San Francisco. “It was quite a tricky thing to get all the boats together, but in the end we were successful.”

Summing up the undertaking Slat said: “The good news is that we can already say that The Mega Expedition has been a tremendous success.”

He explained that they have retrieved great amounts of samples that they will study in the OC lab in The Netherlands. In fact, according to Ocean Cleanup lead Oceanographer, Dr. Julia Reiser, who was onboard the mothership for 30-days conducting studies, the amount of plastic was somewhat stunning.

“All the trawls we did, had little marine life and lots and lots of plastic,” Reiser said of what they found during the Mega Expedition. “I would say that we had hundreds of more plastics than organisms in our catch. I’ve been doing research from vessels at sea for the past few years and I’ve never seen an oceanic area as polluted as The Great Pacific Garbage Patch.”

Reiser said they hauled in more plastic than they expected and that with the data that’s been collected they will be able to determine an up to date figure of the total load of plastic that’s floating in the notorious area. The Ocean Cleanup’s goal is to publish the main portions of their findings by the middle of 2016. In the meantime they continue to develop their Ocean Cleanup Array and engineers recently installed a scale model in an offshore basin at the world-renowned Maritime Research Institute Netherlands (MARIN) – see the latest updates at theoceancleanup.com

From a sailing perspective, it was an unprecedented showing of sailors coming out in force to take on a serious issue. And this undertaking was more than passing out flyers or participating in a benefit regatta. The sailors who participated in The Mega Expedition made an enormous commitment. They took seminars to learn the practices and how to manage the equipment, readied their boat and crew, and crossed an ocean in the name of research.

Sailboats were completely integral to this mission for their ability to handle long range crossings and handle open ocean conditions. The skippers and crew who participated spent weeks at sea, sometimes in more than uncomfortable conditions, to collect the samples they were charged to amass. One on-board scientist, Stella Diamant, who was traveling on a volunteering Gunboat said of the experience:

“When you hear of The Great Pacific Garbage Patch you think that things are going to be so big,” Diamant said. “But actually there’s barely anything floating. Just beneath the surface you find all these things you wouldn’t see otherwise – [the plastic pieces] are so small.”

Diamant called the amount of plastics in the region “mind blowing”, saying that each time they trawled, there were “huge loads of plastic.”

We congratulate the Ocean Cleanup team for their efforts and all of the sailors who made the journey for this important cause. ASA will continue in its effort to raise awareness of the plastic pollution problem and encourages all sailors to be mindful of our ocean’s health. Keep track of your own plastic, dispose of it responsibly, and if anything out there that shouldn’t be – scoop it up!