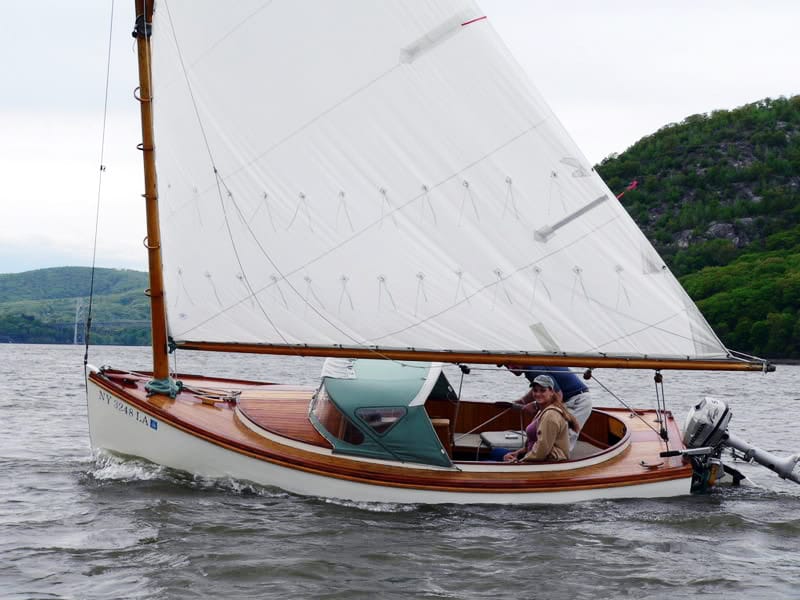 Typically speaking, a cat rig is a single mast situated well forward, near the bow, which carries a large single sail and has no standing rigging, sometimes referred to as “unstayed.” An Optimist, Laser or Sabot are common (smaller) examples of a cat rig, but many bigger boats utilize the set-up.

As we’ve established in other What’s in a Rig articles, rig choice is always subjective. Most folks go for the popular Marconi (or Bermuda) sloop rig, but others like to be a bit different and work with less standard arrangements. The thinking behind choosing a cat rig as apposed to a yawl for instance, is probably rooted in more practicality than romance. Take it east yawl sailors, we know we know, they are more stable, and have advantages for long range cruising. Maybe, but we also know you like the way they look! Cat rigs, on the other hand, are truly simple to sail and manage. With one large sail and no rigging, a cat rig is up and running in moments and they can be single-handed quite easily. There is also considerable savings not having to maintain, tune or replace expensive rigs. And yet another benefit of the cat rig design on bigger boats is the amount of salon space they deliver. With a mast placed so far forward, the cabins are often very roomy.

So what’s the downside? Well, you’ve heard this tune before: upwind performance. There’s a reason why the common sloop rig is so incredibly popular. Some may say it’s because racing has such a powerful influence on the market, but the truth probably more accurately revolves around the fact that sloops are simple to sail and just go upwind so very well. There are modern cat rig designs like Wylie boats that have innovations (the wishbone boom) that address the upwind limitation, but most classic cat rigs suffer in the upwind department. However they do not suffer if fast efficient tacking and comfortable downwind running is your bag. Tacking a cat boat is basically one quick turn through the wind and it all pretty much happens for you.

Cat rigs are simple, maneuverable, efficient and economical. They’re especially suited for short-handed sailing and downwind passages. And a catboat sailor is probably someone who doesn’t mind traveling on a less trodden path. If you plan on a long downwind journey alone or with one other, take a look at some catboats – might just fit the bill.