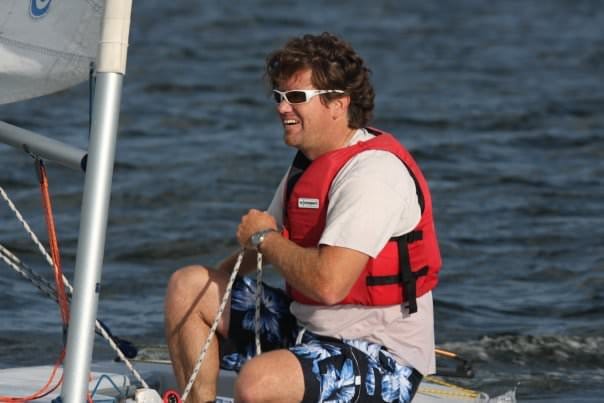 Brenton Lochridge lives and breathes sailing. After learning how to sail at a local YMCA camp on the Chesapeake Bay at seven, he caught the bug and kept on sailing. By the time he hit his teens, he would be on a boat nearly every day.

At 22, Lochridge had hundreds of miles under his belt and started his own sailing school. He currently owns Black Rock Sailing School where he has been an ASA instructor since 2008. Over the 20-years he has been teaching, Brenton has sailed countless hours on many different kinds of boats and says all the experience has, of course, shaped him as an instructor, one worthy enough to be recognized as one of ASA’s Outstanding Instructors.

“Over the years, I have become a jack of all trades and master of some,” said Lochridge. “I have sailed year round since 1995 on a wide range of craft – including windsurfers, high performance dinghies, a wide variety of racing and cruising monohulls up to 65-feet, and racing catamarans up to 48-feet.

“Since I have been teaching full-time for over twenty years, I have learned a dozen ways to explain every aspect of every class, and have the stories to reinforce lessons – yet I am still learning to this day.”

Through and because of all his varied experiences Brenton has formed a deeper relationship with sailing than most. He sees sailing in more of a broader sense. There are many who consider themselves either “racers” or “cruisers”, but he’s never been one to live in a box.

“I have always been more of a ‘soul sailor,’ rather than a full blown racer or cruiser.  Sailing in any form makes me extremely happy. I love the challenges that are ever present, the freedom, and the countless adventures that sailing has provided me.”

When asked what he likes to impart on people thinking about getting into sailing, he says:

“It is never too late to learn how to sail – and it doesn’t have to be expensive.  Make it happen.”