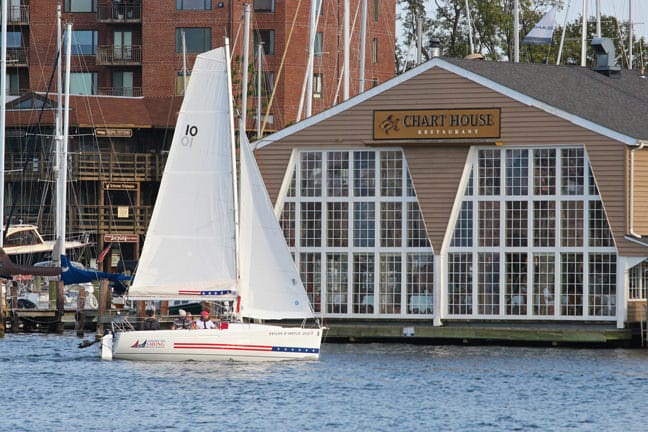 The registered students will get to participate in a 30 minute in-class basic briefing followed by a 90 minute on water intro to sailing lesson. This clinic has been developed by the American Sailing Association and is part of their Small Boat Workshop for New Sailor Series.

“The ASA First 22 is the perfect boat for teaching our clients and members the basic fundamentals of sailing”, said Todd Hess, president for SailTime. “Training is a significant part of our business and service to our customers. Having a fleet of ASA First 22s at our Annapolis location will further this franchise’s lead in market as the first sailing school on the Chesapeake Bay to offer training with a boat designed specifically for the ASA Basic Sailing curriculum”.

“The ASA First 22 project’s objective is to invite more people to experience the thrill of sailing, which is exactly what our company’s success is built upon,” explained Laurent Fabre, President of Beneteau America. “We feel very fortunate to partner with ASA to offer an exciting boat for their associated schools to attract new sailors. We’re confident this new vessel will enhance their students’ and instructors’ time on the water. And it’s just the beginning!”

“This is exactly what the ASA First 22 was designed for, putting people on the water to have fun and experience how easy it is to learn to sail”, said Lenny Shabes Chairman of the ASA, ”I couldn’t be more excited about Sail Time’s new association with Beneteau, and their choice of the ASA First 22 as their entry level boat, as well as their continued commitment to the best sail training possible and to the ASA certification system”.

SailTime has always been an innovator in the boating community, using an online calendar system for shared usage of vessels. The SailTime membership program began as a way to get more sailors out on the water and to offer an alternative to boat ownership. For every boat in the fleet, there are six to eight members sharing one vessel. Many members are relatively new to activity of sailing and have chose SailTime as the ideal way to learn and acquire experience.

Beneteau is known worldwide for its sleek design, quality construction and innovation in the manufacturing of seaworthy sailing and power yachts. The Beneteau story began 130 years ago when Benjamin Bénéteau started building fishing trawlers in Saint-Gilles-Croix-de-Vie, France. Today, the company continues to thrive under the leadership of Benjamin Bénéteau’s granddaughter, Madame Annette Bénéteau-Roux.

Beneteau Headquarters for the Americas is located in Annapolis, Md. Beneteau has manufacturing facilities in the U.S., France, Italy, and Brazil.

SailTime members share the use of a professionally managed boat, through the use of an online scheduling system. A monthly membership fee covers the slip fees, maintenance, insurance and operating costs.  These memberships offer an attractive alternative to boat ownership. SailTime also offers a generous Owner Member Program where the owner receives a monthly income, as well as the benefits of membership.

Now celebrating its 14th Anniversary, the company has over twenty-eight bases in North America and seven bases in Australia.

A unique feature of the program is SailTime PLUS, where members can go sailing at base locations around the world for a significantly lower cost than traditional bareboat charter fees.

SailTime also has a significant network of sailing schools, via bases that are certified American Sailing Association (ASA) and Royal Yachting Association (RYA) affiliates. The instruction provided at these locations has been a key component in providing a pathway for members to achieve their goals and dreams for the sport of sailing.

About the American Sailing Association
The American Sailing Association (ASA) has been the leader in U.S. sailing education for over three decades. The Association has grown to include an international network of more than 300 professionally accredited sailing schools. Nearly one million certifications have been awarded to almost half a million people who have been introduced to sailing through ASA schools and clubs since 1983.