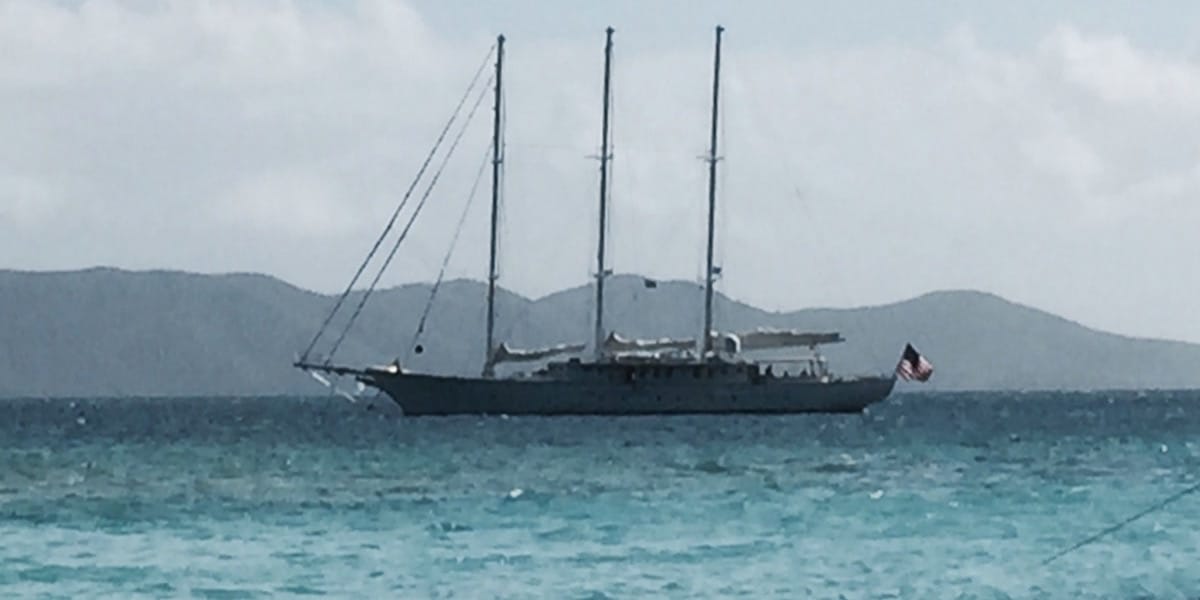 The ASA member’s event aboard the spectacular Arabella in the British Virgin Island got off to a great start. 34 sailors from all over the country boarded the beautiful 165′ Arabella at village Cay in Roadtown Tortola. In the expert hands of Captain John Eginton and first mate Brad sailed to White bay in Jost Van Dyke. It is the home of mesmerizing turquoise waters, white sand beaches and the famous Soggy Dollar bar (credited with inventing the pain killer rum drink). After dinner aboard many went ashore in Great Harbor to experience the famous Foxy’s bar. More adventures to come as the week unfolds. See our gallery of pictures…

Join us on our next “Arabella” voyage

Our schedule includes New England trips in the Fall of 2015, and the BVIs in the Winter/Spring of 2016

On board the beautiful Arabella once again! For this Arabella passenger, it’s my 4th sail aboard this spectacular schooner, and again she does not disappoint. There’s nothing like pure sailing, the wind in your hair and the sun on your face and a great crew to bring it all together. The second day aboard began with a delightful selection of fresh-baked quiches, breads and fruit. Then we took advantage of some very nice winds for a 3-hour exhilerating sail to Guana Island and lunch on board. Then over to Marina Cay for snorkeling, beaching and exploring, or just relaxing. Snorkelers encountered a colorful variety of sea life, as well as s couple of barracudas, and were thrilled when a giant manta ray flew out of the water in front of them. Some of us ended the day watching the sun set over the crystal clear waters while dining al fresco at Scrub Island Resort, while others partied on into the night.
Julie Walker, San Diego
Nautical nonsense by the sparkling sea—it doesn’t get much better than this. Team Arabella made a good showing at Michael Beans’ Happy Arr last night. Bob and our group of jolly wenches (Kia, Amanda, Joleen, and Loise ) made a valiant effort at the conch blowing contest, though without the benefit of ship-board practice they were only able to muster a few squeaks and a bit of a hum. We sang along to “Harry Buffet” tunes ( a mix of Jimmie Buffet and Harry Belafonte) and waved our hands in the air, Parrotheads trying to resurrect a carefree past. And who knows? Maybe we succeeded, if only for a couple of hours. Amid lame jokes, fake tattoos (mine was a red-headed pirate, of course!), and fruity rum drinks, we managed to shuck off the cares of a weary world and raise money for a good cause (The Good Samaritan Foundation in Haiti). If you look closely at the grinning faces in the photo, you can see that each of us became, for an evening, a Jolly Mon.
Shari Lane, Oregon
First, the disclaimer: I’m a dinghy sailor and I’m used to steering with a tiller. That said, helming the Arabella in 25 knot winds was an entirely new experience. Arabella’s wheel was much different from the other wheels I’d used on smaller “big” boats. It took eight turns of the wheel to make what seemed like small adjustments. Instead of looking at telltales and sail trim, I was looking at an instrument panel that would rival that on a small plane. I alternated between checking the compass heading, trying to keep the boat on a beam reach as indicated by the apparent wind indicator, keeping the rudder angle steady (while Brad kept saying, “Turn it faster, head up more, fall off more!”), and glancing at the wind speed indicator (30 knot gust!) and the boat speed (over 8 knots consistently!) Meanwhile, my forearms began to bulge like Popeye’s with the strain of holding and turning the wheel. It was an exhausting but exhilarating experience! Only after several of us had taken our turn and the captain was back at the helm did we learn that he usually steered with the joystick, which was essentially a small tiller! Steering a 165 foot schooner under full canvas in 20-25 plus winds was exciting, with the wind tearing at my hair. With beautiful blue skies and turquoise seas in 80 degrees, what could be better?
Marge Benning, Denver CO 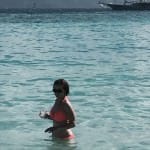 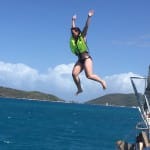 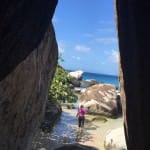 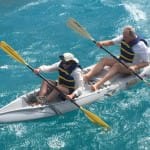 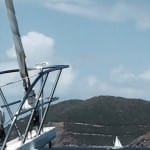 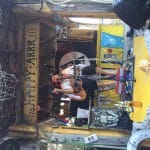 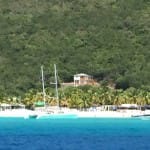 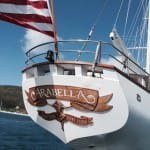 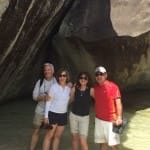 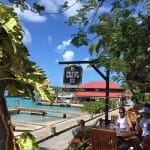 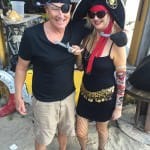 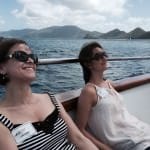 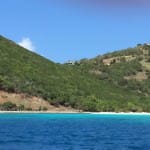 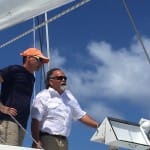 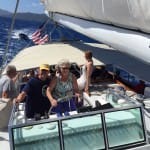 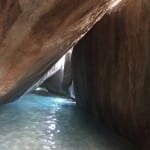 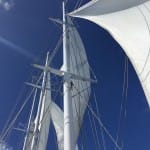 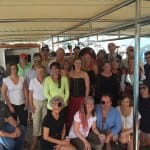 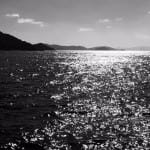 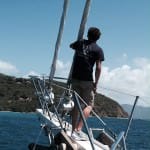 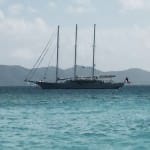 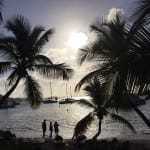 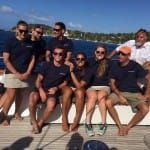 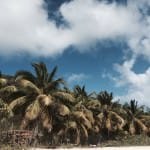 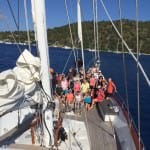 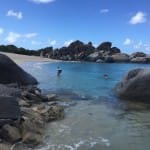 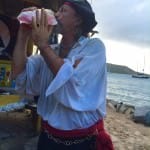