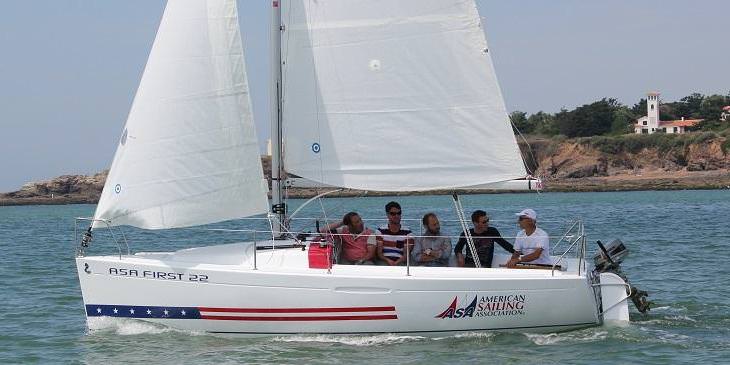 The American Sailing Association (ASA) and Beneteau America and have entered in to a strategic partnership, to design and build a fun, appealing, modern and easy boat to entice aspiring new sailors to discover the magical world of sailing. The ASA First 22 is a product of the collaboration between Beneteau’s ace design team and the input of a team of ASA’s schools and instructors and it will be debuted at the 2014 Annapolis Sailboat Show October 9-13.

The new sailboat, ASA First 22, is being produced in the USA at Beneteau’s factory in Marion, South Carolina. Some of its features include a very large extended cockpit that easily fits four students and an instructor. The hull is stiff and virtually unsinkable with a rig designed specifically for sail training. There are tons of ergonomic and safety innovations that will ensure that your sailing lessons will be comfortable and safe.

The Finot Conq & Associates design resembles that of the popular First 20 and 25 but with a deck and rig specifically developed to enhance the learning experience of the students.

“Throughout the process, we have sought the feedback of a representative group of affiliated schools and instructors. Since they have influenced the initial design of the boat and continue to offer valuable input, we’re confident the new ASA First 22 will be a great success.” commented Lenny Shabes, chairman of ASA.

“This project is particularly exciting to Beneteau; building small sailing vessels to invite more people to experience the thrill of sailing is exactly what our company’s success is built upon,” explained Laurent Fabre, president of Beneteau America. “We feel very fortunate to partner with ASA, the leader in sail education, to offer a new and exciting boat for their associated schools that will attract more new sailors. We’re confident this new ASA First 22 will enhance their students’ and instructors’ time on the water!”

Come check out the new ASA First 22 in the Beneteau booth at the
2014 Annapolis Sailboat Show, October 9th – 13th.