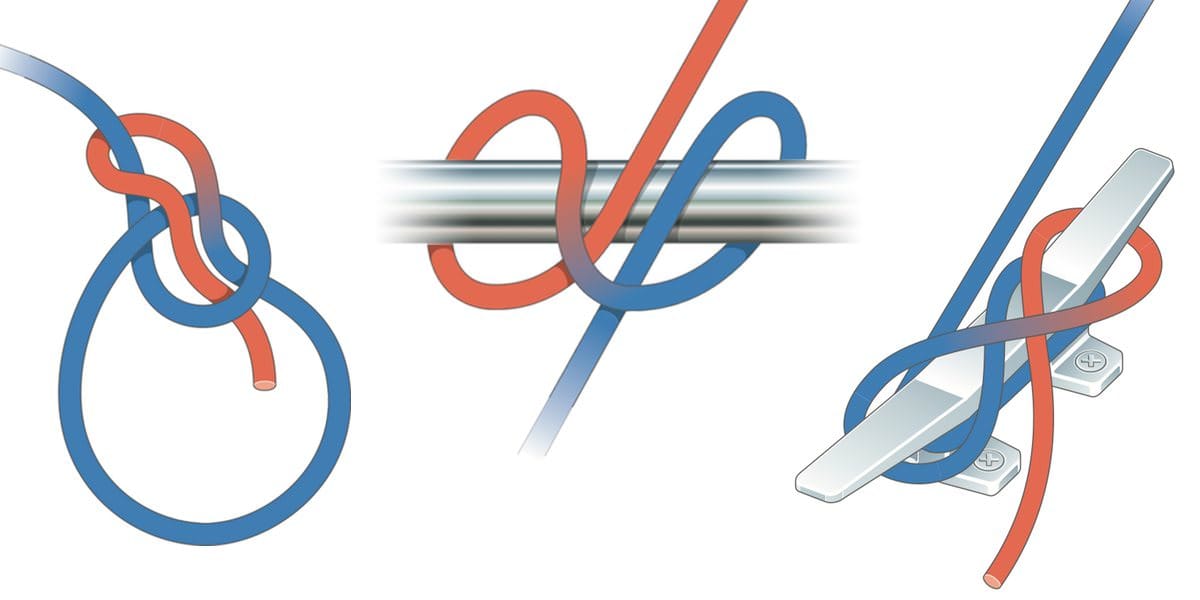 There are as many sailing knots as there are stars in the night sky — or so it seems. But the reality is that most sailors can get along with only knowing a few, as long as they’re the right ones. In this blog I’ll single out three very important sailing knots, explaining what they’re used for and how to tie them. Don’t forget, it’s necessary to practice these in order to get them down. Your fingers need the tactile learning experience in order to develop muscle memory that will allow you to tie them quickly when you need to!

Knowing these basic knots will make you more useful as a sailing companion. Next time you go out sailing with a friend, take a charter, or join a flotilla, you’ll feel more comfortable helping out around the boat when it’s time to put fenders out, tie up to the dock, or make a line fast.

So, read about the knots here, and practice with any old piece of rope you have handy. (A synthetic rope like the ones used on sailboats works best!) Then sign up for an ASA sailing course to get hands-on practice.

The bowline is the king of sailing knots. It has been in use by sailors continuously for at least 500 years. Simply put, the bowline is way of turning the end of your line into a loop. Why is this useful? You can tie it around a post or other fixed object to make the line fast, or on smaller boats it is used fasten the halyard to the sail. It can also be used to tie two lines together. It has a number of practical uses as well, such as hanging a hammock. Under pressure the bowline tightens, so it won’t give way. However, note that it’s impossible to untie while bearing a load!

A clove hitch is an extremely useful and quick knot. It has the advantage of being very quick to tie and untie, but it doesn’t hold nearly as well as the bowline. On sailboats, one of its most common uses is hanging the fenders over the side as you come in to dock.

HOW TO TIE IT:
Step 1: Wrap the end of the line around the post (or whatever you’re attaching it to).
Step 2: Cross the line over itself and wrap it around the post again.
Step 3: Loosen the last wrap slightly and slip the end under, then pull it taut. This is a way of “locking” the knot.
Step 4: Give it a few tugs to make sure it’s secure, and you’re done! This type of knot is designed especially for one purpose, and I bet you can guess what that is. If you said, “Making the line fast to a cleat,” you were correct. As you might imagine, this is used all the time on a sailboat, whether you’re docking, towing a dinghy, or rigging a preventer. Knowing how to do it will make you a much handier sailing companion!

HOW TO TIE IT:
Step 1: Make a wrap around the base of the cleat. Begin your wrap on the edge furthest away from where the line originates.
Step 2: Make a figure 8 on the cleat. If the line is going to be under a lot of pressure, and the cleat is big enough, repeat this two or three times.
Step 3: Add a hitch to the final turn to lock it. Do this by making a loop with the tail end underneath, hook it around the cleat, and pull taut. The tail end should be pointing away from the line’s origin.

Remember, practice makes perfect! Don’t be surprised or discouraged if these sailing knots don’t come out right the first few dozen times you do them. But enough practice, and they’ll become like second nature. Armed with just these few knots, you’ll make a great addition to any crew, including one of the charter groups on our flotillas to places like Scotland, Croatia, and Tahiti.