If you are in a position to help Carl with equipment or anything else to make his dream a reality, please contact us.

Not everyone gets to experience a full dose of inspiration quite like Carl Huber who will soon be sailing around the world alone, non-stop and unassisted in the Golden Globe Ocean Race in July 2018. The soft-spoken father of five was nearly fifty when he learned to sail but interestingly and unlike most, he was inspired to sail even before he ever stepped on a sailboat. He knew, almost instinctively, sailing was his calling.

“I had friends who said, ‘If you want to sail, get a Sunfish and sail around the lake,’ but I don’t think they understood what I meant. What I meant by ‘sail’ was get out in the South Pacific, or the Caribbean, sail across oceans. A little lake between mountain peaks wasn’t going to cut it – I wanted to be out of sight of land.”

Huber found the Maryland School of Sailing and Seamanship and got to the business of learning the ropes. He took his 101 course on a 32′ Island Packet and later, after realizing it would be about the same cost to complete his 103 and 104 course at home or in the Caribbean, he chose the Caribbean. He returned to further his learning with the completion of 105 and 106 courses, saying: “At that point I felt very competent.”

As his confidence grew, Huber began looking for a boat and while doing so came upon an ad for the Golden Globe Ocean Race, a single-handed contest revamping the famous Sunday Times Golden Globe Race of 1968 – the first unassisted round-the-world solo race. The new race, slated for June of 2018, is designed to be exactly like the first one. They are attempting to be as faithful as possible in keeping the technology on the boats to 1968 levels. There will be sextants abound and sailors are even being mandated to use film cameras and/or 8 mm movie cameras to document their trips. 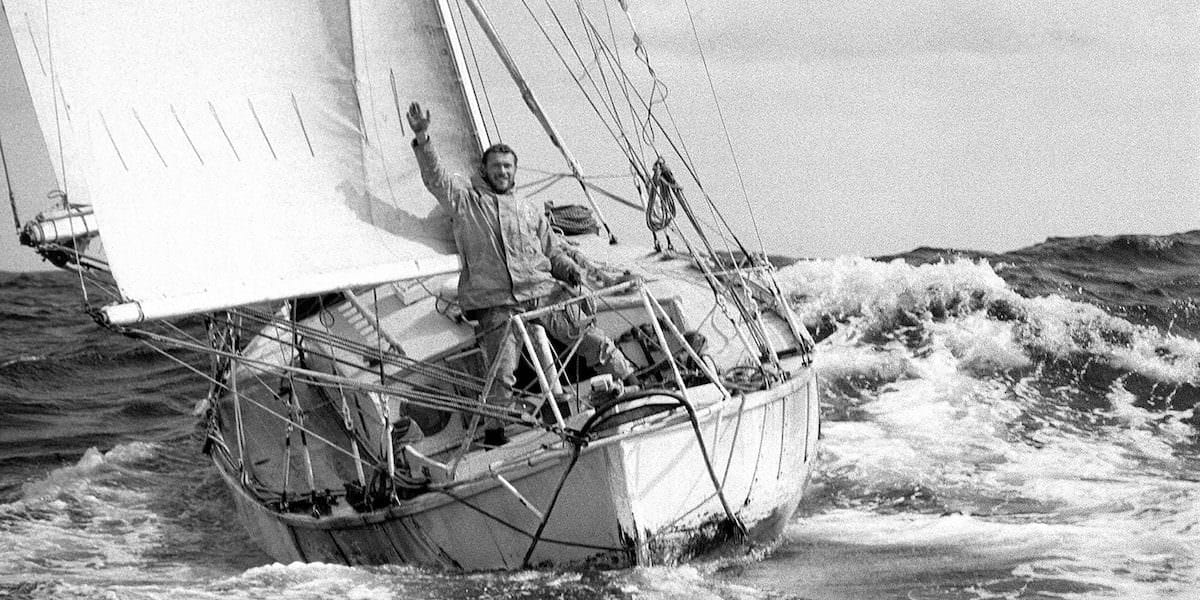 At first Huber saw the race announcement with nothing more than passing curiosity. He mentioned it to his wife who suggested, to his surprise, that he enter. That encouragement led to his waking up in the middle of repeated nights with the question: “Why not?” And the decision was made.

For Huber the race is a reason to get him out of the cubicle and into the vivid outdoor world he saw mostly out of an office window. Like so many, he has worked hard to provide for a family as life sped by at rapid speed. He says he turned around and suddenly he was in his 40s and hadn’t done many of the things he wanted to do.

“I could spend another 10-years typing in a box and retire in comfort – that just doesn’t appeal to me. I want to do something more in life. I want to contribute to the planet in a more significant way and I want to do something more significant before I go. Sailing around the world is something that’s always been right there in front of me and, as of late, becoming a frustration as I get older because I realize I’m not going to do it unless I do it.”

So he bought a boat – a Ta Shing built Bob Perry designed Babe 35 class yacht that was built to tackle oceans. He sailed back to Maryland from the Caribbean and had an absolute horrible passage home. It’s a strong boat but needed work – the passage gave Huber a taste of hard times at sea.

“I thought the boat was trying to kill me,” Huber said. “It was an ordeal – like a religious trial.”

With a year to the race, the new solo-sailor is now up to his neck in preparation tasks. He is actively looking for sponsorship for the long list of equipment he needs, but is confident he will make the start line no matter what happens.

Beyond addressing personal goals and aspirations Huber is also using whatever publicity he gets in his participation in the event to call attention to an ideal he often thinks about. He sees many of our problems as human beings, individually and collectively, are a product of how we relate to the planet and if we were able to see things through a different prism, we would all be better for it.

“We do not relate to our planet as a symbiotic organism. We relate as an adversarial organism—humanity against the planet. We take advantage of earth instead of living in harmony with it… I think we need to fundamentally change the way we think of ourselves in relationship to the planet.”